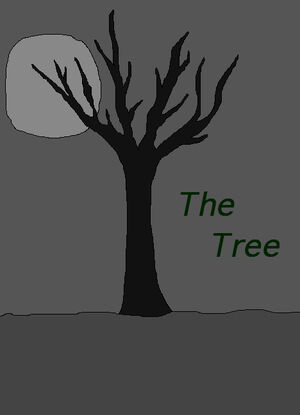 Aaliyah sat next to the bottom of the immense tree. She was leaning against the trunk, and was looking up towards the sky. A slight breeze carried her hair from her shoulder out past the tree, yet she didn't take her eyes off the sky. As the gust faded, her chestnut hair gradually returned to her side.

Aaliyah stood up. Another gust took her hair a foot away. She looked up at her tree, knowing she wouldn't be able to do so for long. She had been informed by her mother that the tree would be cut down, for fear that it would fall anyway. Aaliyah hadn't seen the point in this, the tree was in a peaceful area of space. There was nothing around besides grass, and the pink-white petals from the branches. Thinking of this, Aaliyah watched as another set of petals floated with the wind to the grass. They nestled in the grass, while some continued tumbling across the ground.

A wave surged through her stomach. She would miss this. The beauty of the tree was meant to stay until fate brought it to an end, Aaliyah didn't know why anyone would purposely put an end to the story earlier. The tree brought peace to her, a calming sensation that always put her in a good mood. And to have it disappear was like losing a loved one. Aaliyah pulled these thoughts out of her mind as quickly as possible; she shouldn't spend her last few days worrying over the end. 'A week is enough to enjoy what I have', she told herself. In addition, there was still time to save her tree.

Aaliyah jogged home in fear she'd be late for dinner. When she arrived outside of her house, she took a look behind her to the horizon. The sun was on the edge, and dusk had arrived. She turned on the orange lantern near the door until it was glowing. Aaliyah opened the door to the small house, and stepped in to her mother and sister waiting for her.

'Aaliyah, we have something to share with you', her mother explained. Aaliyah could tell from the energy in the room that this wasn't good news. She nodded, signalling for her mother to continue. 'About the tree cutting next week...it's been moved. The community has voted, and it has been determined that the size of the tree is too risky of a danger to wait. So instead of next week, the tree will be cut tomorrow.' Aaliyah stood, glaring at her mother. 'Were you in this vote, mother?' she asked, with little interest showing in her voice. 'Aaliyah...I had to vote for an earlier cutting, that tree is dangerous! It's only a tree, you'll move on in life.' Aaliyah ran outside before her mother could comfort her. She ran through the darkness to her tree, not turning back.

At the trunk of the tree, Aaliyah lay. Her eyes were closed, unable to comprehend that her tree would soon disappear. She slowly fell asleep.

The loud noises awoke her. She saw several full grown men carrying a large saw, slowly approaching her tree. Aaliyah whispered to the tree, and walked away. Everyone thought she would put up a fight, but she simply walked far away from the tree, across the horizon. Throughout the cutting, no one saw her. As dusk returned, the workers left, taking the once massive, tall tree with them. All that stood left was an ugly old stump.

Aaliyah returned to the stump in the middle of the night. She sat on top of the trunk, and put her hands together. She sat like this for fifteen seconds, until she slowly began sinking into the trunk. Soon, her entire body was hidden, submerged within the once existing tree. Another tree suddenly sprouted into life, petals flowing in the wind. Even though it wasn't nearly as tall as the old tree, it was as tall as one that had been growing for one year. Another breeze carried the petals across the base of the tree.

A voice, that sounded almost like the whistle of the wind, said, 'Just like it should be'.
Retrieved from "https://shortstories.fandom.com/wiki/The_Tree?oldid=4423"
Community content is available under CC-BY-SA unless otherwise noted.