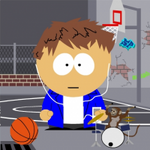 Random much on Scope's shack! I finished Shade's shadow! YAY!! Okay, right after this I'm sliding down my banister! See you on Friday.HAHAHAHAHAHAHAHAHAHA you don't have one of these

OK, I'll get right on it. Just a couple of things you have to follow while you're on the wiki:

You'll be able to reveal info about yourself, but I will still be under 13, so keep quiet about me. REMEMBER TO SIGN YOUR POSTS WITH FOUR TILDES (these things ~). OK? Thanks. ---- Telos Talk

So that people can tell who you are without having to look in the history, by doing four of these ~ it will show your username. ---- Telos Talk

Your signature is completed! Now you don't have to use the four tildes. Instead, you type Guitarsig inside these funny shaped brackets {{}}. This is how it looks. Tell me if you like it!

Pretty good, except there's one BIG problem. I can understand RITDDAG taking in criminals as long as they're really skilled and promise to go straight, but a murderer? When Scope got caught he'd just get locked away for a loooooooooong time. Sorry, but I think you have to write that chapter again :(. I would recommend making him a thief. ---- Telos Talk 02:14, 15 January 2009 (UTC)

Cool sig! Scope's shack is much better now, like the bit about the body raft! Telos always has to be so fussy doesn't he?!?

Please do some more on Scope's shack, its so cool! And please feel free to help out with the fancy dinner bit we could really use your assistance

Yay you got a contents page Edit

Yeah soon, I'v just got to ask Telos what the first mission is!

Thanks for supporting me! :D -- Telos Talk

C'mon guitarmad, I thought you where gonna help me with Front Lines first mission. so hurry up!!!!

D you think that instead of the bus randomly plunging of a cliff there could be an explosion in a nearby buiding that sends the bus into a spiral and causing it to slam into oncoming traffic? just a suggestion...

P.S thanks for helping

If you do not reply in the next 2 days I'm gonna change that bit of the first mission, so reply if you think I'm a retard

Hurry up and reply to my message above I don't feel right changing your bit of the story without your permission. The one and only

Thanks for the compliment about the firing range bit! I've got pretty much the rest of the story worked out:

Awesome! However, if we do decide to publish Front Lines, we have to think about some things, like who has the rights to the book and how we split the earnings. We also need to decide whether or not to take it off the wiki. If we keep it on here, what incentive will people have to buy the book? -- Telos Talk

Well, are we going to publish it to make money? If so, the expenses could be more than what we earn. Think about this. We could have to raise funds to pay for:

There are lots of companies called 'Front Line' and things like that too. What if one of them raises a lawsuit? We have a long way to go before we try to publish Front Lines, and a lot of things to think about too.

A couple more things. Back during primary school, weren't you writing a superhero story? There are two things I'd like to ask you about it:

1. Are you still doing it, and if yes, are you going to upload it onto the wiki?

2. If you're not still doing it, is it OK if I write it instead and give you credit?

Sure, so we'll write it together? -- Telos Talk

Of course! I'll start writing it with you on the weekend! : ) -- Telos Talk

Yeah, I still play. I'm a member of the Runescape Wiki, you can my account here [1]. I'll add you, my name is Scorchnecrus. -- Telos Talk

I'm thinking that maybe I should have Timer die. I think it would be cool if the team got captured and Timer is shot (and then maybe Shade bashes the crap out of the shooter in revenge). What do you think about Timer dying (possibly in Front Lines 2)? -- Telos Talk

Actually, I was thinking of ending it there and having the team disband (break up). There would be about five years between Front Lines: The First Mission and the original Front Lines, so instead we could make more prequels. I sent this to Chappy about Timer dying, tell me what you think of it:

When Rapid awoke, he was tied to a chair in what seemed to be a deserted warehouse. A masked man dressed in all black stood in front of him, pointing a gun at Timer, who was also bound to a chair, along with Shade and Scope. The man finally spoke in the same annoying drawl that Raphael Hassar possessed.

"I am Pakish bin Hassar. I understand you killed my uncle, Raphael. For that I must kill you all." he stated. As he said this, Shade struggled with his bonds. Using his double-jointed thumbs, he successfully loosened the cables holding him to the chair.

"Yeah, yeah, yeah. That's what they all say, but you'll just lock us up, we'll escape, and your ass will get kicked." Scope smirked.

"No, I'm just gonna kill you," Pakish responded, and shot Timer five times in the chest.

"NO!" Scope cried out as large crimson spots quickly formed on Timer's shirt. An overwhelming rage suddenly overtook Shade. His friend, Timer, had just been shot dead, in cold blood. He had been defenseless and at Pakish's mercy. Pakish had to be punished, he had to be hurt. With a scream of fury, Shade freed his hands and leaped out of the chair. At an incredible speed, he disarmed Pakish bin Hassar and threw him to the ground. Shade pinned Pakish's arms to his side and sat on his chest so he couldn't move, then grabbed Pakish's hands and crushed his fingers together, dislocating them all. Pakish screamed in agony, but Shade was far from finished. Shade drew back his fist and punched Pakish in the face as hard as he could. Shade felt the satisfying crunch and flow of warm blood as Pakish's nose broke beneath his knuckles. Once again Shade raised his hand and struck Pakish with all his might, relishing the criminal's pain. He deserved to suffer for killing Timer.

"This is for Trent!" Shade yelled, and smashed Pakish's already shattered nose another time. On this punch, Pakish's skull cracked from the powerful blow. A browning liquid began to ooze from where Pakish's nostrils used to be, but Shade didn't care. Again and again he hit Raphael Hassar's nephew in the face, even after Pakish bin Hassar was obviously dead. Shade didn't stop until Pakish's entire head collapsed like a ruined watermelon. Blood and other fluids completely covered the floor and Shade's hands.

"Scott, stop..." Timer gasped. Shade rushed to his friend, startled that he was still alive.

"You have all... been the most... wonderful... companions," Timer rasped, struggling to form the words and gasping for oxygen. So much blood soaked his shirt that it had began to trickle onto the filthy floor. "Please tell Sasha... I love her," Timer murmured softly. Then his head rolled back and Trent Williams finally died. Scope, Rapid and Shade all wept in unison. Timer, the one they relied upon to keep them organised, was dead. It seemed impossible; incomphrensible. After five years fighting crime together, as one, Timer was finally dead.

After that there would be a scene about Timer's funeral, where Amy Groves would tell Shade, Scope and Rapid that Operation Front Lines is over, and they would get regular jobs. Rapid would join the army, Scope would become a comedian and Shade would get a wife and family (but if you don't like that you can change it). What do you think about all this? -- Telos Talk

Thanks for the compliment! -- Telos Talk

What did you call that superhero story? I can't remember... *scratches head* -- Telos Talk

Should we make a completely new storyline or keep the old one (just slightly redo it so it's better)? I thought the old one was pretty good, but new characters is probably a good idea. I think the old one went something like this:

From what I remember, the main character had light and laser powers, and had several companions (a guy with fire powers, someone with super strength, and a guy who could make create things with his mind). I don't think we ever gave a name to the villain (just for this summary I've called him the "Dark Lord") but I think he could create solid shadows to use as spikes, force fields and to blind people with.

Do you reckon we should completely start over? -- Telos Talk

We are having a Front Lines get together

Yeah its gonna be real coolio! It might have to happen next weekend though, It will be a chance for all three of us to work on Front Lines together. One problem though..................... We don't know whose house to have it at.

Thanks! Have you checked out the forums yet? If not, click here. -- Telos Talk

Heya, I came up with some ideas and characters for the new superhero story. If there are any you don't like, please tell me and I'll think of some new ones.

I'm going to come up with some villains and other characters quite soon. =) -- Telos Talk

Sure! I've come up with a few villains:

A pirate story was completely random and funny! Then I read splinterstone.....................wooooooooooooooooooot!!!!!!!!!!!!!! That was awsome! I love the way you explain the difference between the two races! fantastic work!!!!! Your gonna be a real great writer some day bud!

You know how Alan is not doing Front Lines anymore, right? My friend at school really wants to help with Front Lines, I showed it to him at school and he read everything. mabye he could take over Rapid?

Heya, is it OK if a friend of mine from school helps us write the Front Lines prequels (the ones about Timer, Scope, Rapid and Shade respectively)? -- Telos Talk

Hey Carter. I don't know about you, but I'm kinda getting bored of Front Lines, and I'm not as active on the wiki anymore. As such, I've made you an administrator (you can delete articles and block people and stuff). Also, I think we need to start on a new story - a shorter one that we'll actually end up FINISHING. =P -- Telos Talk 07:16, December 10, 2009 (UTC)

I had a not good enough story as a creepypasta, they are really strict, so that is why I came here

once again, sorry if it is not good enough

Retrieved from "https://shortstories.fandom.com/wiki/User_talk:Guitarmad?oldid=5193"
Community content is available under CC-BY-SA unless otherwise noted.